Sky Bet League Two outfit Bury have signed Blackburn Rovers defender Scott Wharton on loan for the rest of the current season, as the player as failed to make his mark at Rovers. 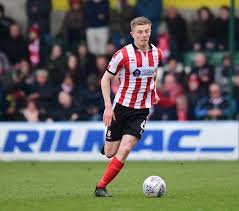 The 21 year old has found it difficult to break into the Blackburn Rover’s first team, spending last season on loan at Lincoln City, a team challenging Bury for promotion to the League One this season.

He also spent the first half of the current campaign at Lincoln City helping them to the summit of the League Two log, six points of current club Bury in second place Bury.

Scott was never a regular for Lincoln throughout his time at the club, starting just five games for the club this season.

Following the capture, Rovers’ manager Ryan Lowe revealed how big the signing of Scott Wharton is for his club insisting that he is a good left-sided defender who will provide his team with depth in that position.

Blackburn Rovers decided to recall the Englishman following Lincoln’s 1-0 win over Grimsby last time out, which happened to be his last game in a Lincoln shirt. He came off the bench in the 89th minute as the club looked to maintain their narrow lead.

Wharton did his job well, strengthening the defense and helping his team hold out for a very important win, maintaining their spot on top of the table, six points above Bury.

If things go according to plans, Wharton could make his Bury debut against his former club Lincoln City when both teams clash at Gigg Lane on January 26.

The game was has been tagged the “Clash of Titans” is expected to play an important role in the race for the League Two title.

Wharton will be looking to help his new club overcome his former employers come Saturday.